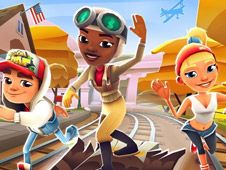 What is Subway Surfers: Washington?

Washington DC is the political capital of the United States of America, so of course, it would have its place in the world of Subway Surfers Games online, which are meant to take you on a world tour of the most important cities on the globe, and how could this one not quality?

Explore Washington with the Subway Surfers!

Use the arrow keys to move, jump, and slide, using these actions to avoid the various obstacles you encounter on the train lines, trains included, not just roadblocks, because if you hit into them too many times, you slow down and the police officer is going to catch up to you.

If you're caught, you lose. Along the way, try collecting as many coins as possible, not just for a score, but to also use them in buying new skins for your character. If the surfboard power-up appears and you get it, activate it with the spacebar and use it to fly over the railways.

The very best we wish you all, as always, and we hope you aren't stopping here, since more great games are always coming over for you all, and we don't want you to miss them!