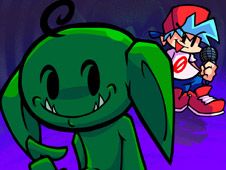 What is FNF Vs Goblins?

Boyfriend from FNF had an encounter with a bunch of Goblins when he went near their cave, and to escape them he now needs to defeat these green little monsters on the song called 'Awaken'!

Defeat the Goblins of FNF and Awaken your musical power!

When you see floating arrow symbols match on the right, press the identical arrow keys to hit your notes, and keep at it until the song ends to win, while being careful not to miss too many notes in a row, because if that happens, you lose and need to start all over again from scratch. Good luck, enjoy!