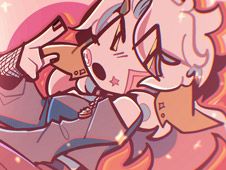 What is FNF Blank Pages Mod?

In our new FNF Blank Page mod online for free, we go into the world called, Utopian Mirage, as we follow Paige and her friends in their daily lives filled with music, where you will sing with her on the following tracklist:

After you've made a choice between experiencing the game in the story mode, or just the songs in the free-play mode, you have to win in the same way, by reaching the end of the songs, something you do by hitting notes according to the charts until the end of the song.

To hit your notes, press the arrow keys at the same time as the identical arrow symbols match on the top right side of the screen, but know that if you miss too many notes in a row, your health bar depletes, and when it is empty, you will have lost. Good luck and simply the best we wish you all!