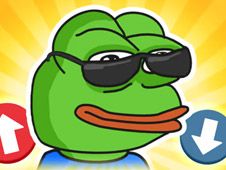 What is Make It Meme?

Make It Meme is a brand new kind of multiplayer game online we are happy to share with you all on our website right now, as we're talking about a game focusing on memes, both really funny ones and really bad ones at the same time, and since we have had a really fun time with this game, we're sure that the same will now be true of your own time with it!

Can you Make It Meme?

There will be ten memes shown to all the players playing in the same room, and you need to vote it up, down, or meh, depending on how good and funny you thought that it is, and the player that gets the most of them right, in line with what the game decided, will earn more points and do a fantastic job, reaching the top rank.

We hope that you have a good sense of humor and it is going to be you, but even if not, the more you play, the better you get at finding the memes that are truly comedic and worth it!

Now that you've understood, let the fun begin, and don't stop at it here either, since we've got even more great games coming for you, as every day we do, for that matter!