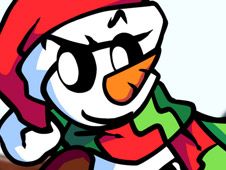 What is Friday Night Funkin’: Vs. Smol Boi?

Smol Boi is a snowman decoration that has come to life, as things happen in the world of FNF Games, and you and Boyfriend are now invited to defeat him and set him back to sleep on the following songs:

From the main menu, you will make the choice between playing in the story mode or free play mode, and in either case, winning is achieved in the same way: by hitting notes according to the charts until the end of the song, doing so by pressing arrow keys at the same time as the identical arrow symbols match above BF's head.

Make sure you're not missing your notes too many times in a row because if that happens too much and the health bar depletes, you lose and need to start again from scratch. Good luck, enjoy!