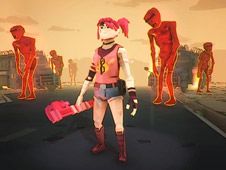 What is Tower Defense: Girl vs Zombie?

Tower Defense: Girl vs Zombie is a game heavy on action and strategy, also a 3D game at the same time, and one that we highly recommend to boys and girls alike, since this woman wants to stand up against the hordes of zombies that want to destroy her home, and you need to help her defend against all of them!

It's Girl vs Zombie in a new Tower Defense game for you all!

With the mouse, you are going to drag turrets and guns on the five spots on the street, and when you have two of the same level, you can drag and merge them together to form a weapon that is stronger than it would have been individually.

The guns will shoot automatically at the zombies coming towards you, but if you let too many of them crash into and get past the defensive barriers, it runs out of health, and if it empties out, you lose.

For each new level that you complete, you get to acquire new skills to use, such as the one that freezes the zombies in the place that you want to do it.

Each new wave is bigger and more dangerous than the one before, but we're sure that with plenty of focus and dedication, you will be able to survive until the end!