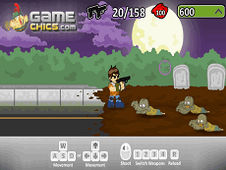 What is Ben 10 Zombie Halloween?

Ben 10 is one of the most popular and beloved cartoon character. He is taking the supernatural powers they hold, but also proves courage, fighting all sorts of monsters and thus became one of the heroes of children. In this game you will control you Ben 10 in his fight against zombies on Halloween. Each zombie killed you get a certain score. The aim of this game is to help Ben to go well with every mission that receives, killing the zombie in cold blood. They can be very dangerous, especially as they are bloodthirsty. Sounds simple but not tried before trying. The arrows you will control Ben, you left click Close, and R will load super weapon you need to win the fight. Keys 1, 2, 3, 4 are to change weapons when you have several. Make sure you do not end your life because you start from the beginning and all progress will be lost. Hopefully this game is to your liking and invite you to try the other games on the site.