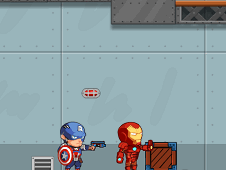 What is Avengers Hero Vs Alien Robot?

Captain America and Iron Man are the two most important figures in Marvel’s Avengers, and the two of them now have to deal with an invasion of alien robots, all of whom need to be defeated and banished from Earth, so you and a friend are going to co-op in this new superhero game in 2 players, acting as the two superheroes and defeating the aliens once and for all! Without working together, the world can’t be saved! Up for the task?

There are going to be fifteen levels in total, which are filled with platforms that you have to move and jump on, and each level presents puzzles that you need to solve to advance. For example, you have to place boxes in certain points, jump on them, and then they jump further up to get to the door. You sometimes have to activate levers and different devices, because without them the road to the exit will not be accessible.

You’ve both got three lives in total, and you lose one no matter which player dies. Deal with all the aliens and robots you encounter, making sure they don’t touch you and then take you out of the game, but defeat them and get past them. Iron Man is moved using the right and left arrows, then up one to jump, and you attack with I. To move and jump with Captain America use the W, A, D keys, and press J to attack.

It’s not every day you get to play superhero 2 player co-op games online featuring the Avengers, so start this world rescue mission right now, and have a great deal of fun, as only here you can!

use the arrows and w,a,s,d