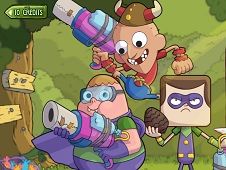 What is Awesomest Battle in History?

Along with Clarence and the whole team that we have we have to prove you're good enough so they all pass the secret missions that you have. First, you have to go into battle with Clarence history properly dressed with a bulletproof vest because their rifles, guns, and shootings are common, and to survive you have to put your mind to and try to overcome all obstacles that you have whenever their path is proving us all that you are able to win these secret missions.

Great care to action, trying to dodge deposit guests, shoot shotgun opponents that you have and try to defend your team because the only way you can survive until the end of their missions. With great care we invite you to put your mind to and develop strategies to attack the opponent's camp in more pars, you get to earn coins with which you can improve your armor, weapons they have, to you buy increasingly more valuable armor and weapons to help you shoot the thieves.

The battle regarding his clan Clarence gets worse depending on superheroes and Vikings and also you have to know that the battle takes place in several places such as can begin to nearest Pizer area, Aberdale house, Food Cousins. Use every point that you have in the new game and try to upgrade the weapons you have, so trying to destroy increasingly more enemies that come your way in the new adventure of Battle in History Awesomest online. Battle Awesomest game is the first game in history to contain money is completely free although given children awesome.

The battle will worsen, with Clarence and you will have to pass each level of difficulty, to give it a boy Clarence is fatter as always eat so you have the strength and energy needed to land the fights hard Awesomest Battle in History.

use your mouse to help Clarence in this Awesomest Battle game.