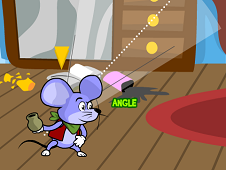 What is Lone Mouse Vs Bad Cat?

Lone Mouse Vs Bad Cat is one of the newest games that appeared in the animal category that will test the skill and precision. In this game you will need these qualities because only you will accomplish your objective successfully. In this game you can play against the computer or against a friend on the same computer. You have to choose with which character you want to play. You can be a cat or a mouse. The goal is to destroy your opponent throwing him all sorts of things. Each player will be entitled to a throw, after which will follow the other player and so on. In this game each player will use another mouse to throw an object to the opponent. Before you can choose to throw the object that you want to throw. You have to set the direction and strength with which you throw. Aim the opponent you will lose life. To win the player who leaves lifeless opponent.