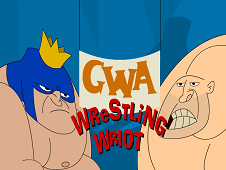 What is GWA Wrestling Wriot?

This is a thrilling game appeared on our site in which you must give proof of skill and agility in the ring. The goal is to win the wrestling match and score as many points. Although it seems an easy job, do not rush to judge, because you have to face a very strong opponent who wants as much as you to win the game. In this game you can be with two of the greatest wrestlers in the world, which appear in the series Kim Possible. Give of your best to reach the top of the best players, because only you show everyone what you are capable. Using the mouse you have to choose the maneuver you want to do in each round, and then wait and see who wins. Be careful because the opponent is very strong and knows many wrestling maneuvers. Every blow to the opponent will receive a certain score. If you win the game and have a high score, you could get among the best players. Each blow received from the opponent you will lose a life of 4 from the left side of the screen. Pay us a like if you enjoyed our game and leave us a comment with your opinion about wrestling.