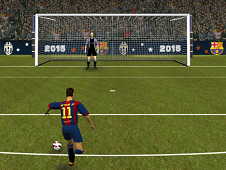 What is Juventus vs Barcelona?

Juventus and Barcelona are some of the most popular and also the best known international football teams, which is why we advise you to try this time and be with these two teams on free kicks, so-called penalty shootout of the match just took place. You should know that the game is for two people, so that each of the contestants will have to choose their favorite team can be Juventus or Barcelona, then begin blows to the opponent's goal. For this you need to know exactly when to shoot and when to kick the ball you so that you win the game just ended. Each point scored in the opponents' whether it is Juventus or Barcelona's football team will subclass opponent team with one goal, so you must be very serious in these shots.

with the mouse you have to shoot with your team footballer.