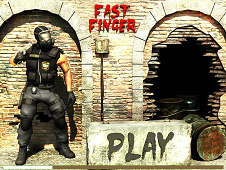 What is Fast Finger?

A new police shooter game, with masked and with riot that are equipped with real weapons, real, including rifles, machine guns, hand guns, bombs and grenades which you will have to use them in new missions that so you have to win increasingly more special missions in which you spoke with ground forces, and masked Aryan trying to catch thieves who have managed to escape with the money. To do win all the activities you have in the new game will have to use the weapons they have, try to shoot masked men coming towards you and try to hit you. Shoot down all terrorists and enemies that come at you so you manage to get all masked actions that are quite cumbersome and complicated every time you start work.

the mouse will have to control all masked policemen whom they have in the new game and this way you get to earn increasingly more missions of the new game.