Restore the Elements of Magic 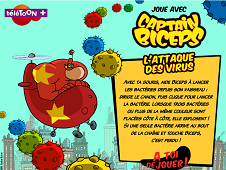 What is Virus Attack?

Captain Biceps The first game is a game of skill in which you will need to go to the final mission, you will have to build a strategy so that you manage to destroy all the colored balls that appear around you and why do we prove that so you're good enough to win battles occurring toxic balls. Use your super powers and also cannon to shoot colored balls magic in the form of Zuma occurring. To become stronger and will have to pass the first level of difficulty of all points won, after which you'll be able to go further in the new mission that Captain Biceps has together with the entire gang of superheroes.

with the mouse you will need to go to accomplish the missions that you and destroy the virus ball.