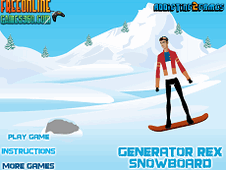 What is Generator Rex Snowboard?

Generator Rex Snowboard is a game that involves extreme sport namely snowboarding. In this game you will be protagonist Rex, a fearless young man who always needs strong sensations to feel alive. In this game you use your mouse to control the Rex. This will go down on one of the steepest and dangerous part of the world, which means that you have to be careful not to hit him. Nobody wants Rex to go directly to the hospital after a holiday which at first seemed pleasant. Generator Rex Snowboard is the type of game where you have to stay focused to the maximum in order to get a score that will make them envious of other players and also to have the chance to enter the top of the best players. Watch out for obstacles that arise during the descent on the slopes as they may instantly appear when you least expect it. Be prepared to avoid any, collect as many points and help him to come down entire slope Rex. Success! Hopefully this game is to your liking and invite you to try the other games on the site. Thank you!