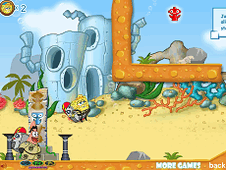 What is Spongebob Squarepants ?

Spongebob Squarepants is a game with a higher difficulty than the other games that surely will test your intelligence, creativity and perseverance. What you need to do in this game is to use the arrow keys to move to Spongebob, which has a super-powered launcher back, because it would allow him to fly. Your mission in this game is to pick a few items that were lost in the ocean and that you need to gather together to clean up the ocean. This task seems simple enough, but each has its own difficulty level, so how much more you before, the degree of difficulty will increase. Also each level will bring a number of points. Be prepared to collect all items to enter the top of the best players. Success! Hopefully this game is to your liking and invite you to try the other games on the site. Thank you!