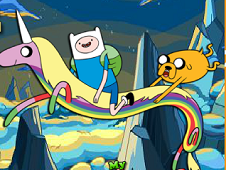 What is Adventure Time Ping Pong?

Adventure Time Ping Pong is an interesting game appeared on our site in which you play ping pong with our heroes Cartoon Network. Give us a like if you enjoyed our game and leave us a comment with your opinion about ping pong. You should try to beat your opponent to get the first 11 points. To win you have to hit it a point to go to the opponent so that the opponent was not able to hit. Try to hit the ball on the edge of the table or in the opposite direction because the opponent is so you will put in difficulty. In this game you need only mouse with which you have to hit the ball ping pong. Be careful not to drop it because your opponent will get a point. At the top of the screen will display the score. If the opponent arrive first at 11 points you lose and have to start playing from the beginning. Give of your best to get on the podium alongside the best players, because only you show everyone what you are capable.