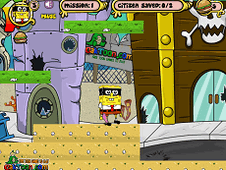 Mask Spongebob Star Gang Attack is a thrilling game that adrenaline will scale unprecedented since the game very complex and risky. Mask Spongebob Star gank Attack is a game where you use the arrow keys to move. The aim is to track and destroy the plans of a new attack by a gang of mobsters who want to destroy the whole city, so you'll be the one who'll stop. You'll have to follow, but while doing this, you must collect all the burgers and everything you find on the trail. Make sure you do not see anyone because if that happens, you will be exposed and caught. You have 5 lives at your disposal if you lose them all, you'll start the game from the beginning, all your progress is lost. This game is the levels. Each level has its own difficulty, so how much more you before, the degree of difficulty will increase. Also you must collect all the points to enter the top of the best players. Give it your best and become number one in the field of espionage. Success! Hopefully this game is to your liking and invite you to try the other games on the site. Thank you!