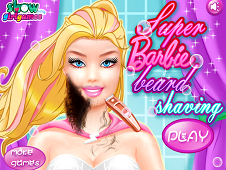 What is Super Barbie beard shaving?

Super Barbie should to be a modern girl, but here in our game Super Barbie have some special decorative item, a beard that you have to shave it. Ok, I know that this game is a little bit different then others, but get a try an start shaving our Super Barbie model. First you have to pull down her mask that is covering his face and her eyes, after that you have to take the shower because first you have to wash her beard, then take the tweezers to remove some sticks from her beard, then you can take the rag to dry Super Barbie's beard. After that you can use the first hair cutting machine that will remove the first layer of hair, then you have to change the head of the machine with other one that is cutting much more from Barbie's beard. Ok, now the beard is trimmed, but Super Barbie want to have no beard, so you have to pick up the razor with you have to remove completely her hair from face. After that pick up the aftershave that will help your prevent the microbial load on Barbie's face.

use the mouse to help our Super Hero bearding her face.