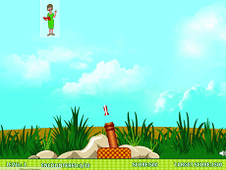 What is Terrorist Shootout?

Terrorist Shootout is a game full of adrenaline, especially lovers dedicated shooters and thrills. Terrorist Shootout is a game where you use your mouse and you're part of a band of terrorists who want to kill some important personalities of this world because, they say, so the world will become a better one. You use the mouse to shoot the rocket launcher towards personalities who want to die. This game is the difficulty levels. Each level has its own difficulty, so how much more you before, the degree of difficulty will increase. Also, this game is about. The points are very important if you want to come in among the top players on the site. If you do this, You come automatically in the running for the grand prize. If at first you're afraid you will not know play the game, do not worry because at the beginning of the game, you have the menu option HOW TO PLAY which will indicate how you have to play this game. You are advised to read it so you become number one among the top terrorists. Success! Hopefully this game is to your liking and invite you to try the other games on the site. Thank you!