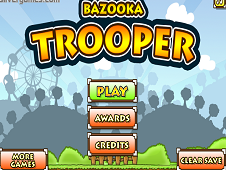 What is Bazooka Trooper?

Have you ever wished or dreamed about shooting with a real bazooka? Honestly I did it often and now, once with appearing of this amazing game, I had the opportunity to try it, at least virtual. You mission is to aim some bad guys in order to kill them because they are very dangerous people and they don't deserve to be in the freedom. They are escapees thieves and criminals and they deserve to die and you are the special agent sent in the mission to kill them all. They are hidden in a kind of amusement park so you have to pay attention at the obstacles and details because you could kill guiltless people or you could miss your target because of these obstacles. Complete the 21 levels of this game and after this you can show off with killing of some dangerous thieves and killers. Use your ability and shooting skills and you won't have any problems with this bad guys. At the end of the game you are gonna be crowned as the king of shooting and the savoir of the helpless people from this killers claws. Good luck and get to the work because evil never sleeps so you have to do the same thing but don't forget to have fun while you're playing.