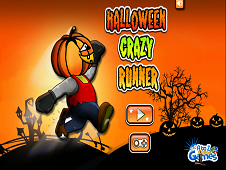 What is Halloween Crazy Runner?

Halloween Crazy Runner is an action game which tests your ability, power of jumping and especially your insight because if you make a wrong step during this game the game is over and you have lost! I guess you are interested in knowing about what's going on in this awkward game, and I'm gonna tell you right now what are you gonna do. You have to use the SPACE bar to jump over some real big and deep pits in which you don't wanna fall because it says about them that whoever ever felt in one of them, never came back and them could be some bottomless pits who send you straight to the hell so you don't wanna fail. This man who is running in the neighborhood is a crazy Halloween runner who was a pumpkin instead of his head and he only know to run after food in order to collect as much food as it is possible. He's a maniac and you'd better avoid him but in this amazing game, your mission is to bring him as far as you can in order to win the game and to collect as many points possible to make a high-score that would be impossible for your friends to take it down!

Use the SPACE bar