The Jetsons Sort my Tiles 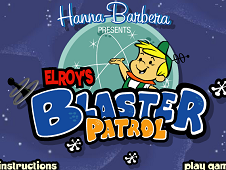 What is Elroy's Blaster Patrol?

Elroy's Blaster Patrol is another game that you are going to be doing something really great and try to gather all the information from there in no time, because that is the most important stuff that you would be doing every single time from now on as well as behaving really nice over and over again. Move so fast that no one would be able to mess with the stuff that you like to be doing and create some things that really matter everywhere. Show us what does elroy wants to do with his life and this time amuse him so fast and nice in order for everything to become happier and happier. Get ready for all the stuff that would occur over and over again, because elroy is ready to make it happen so nice that you would never be aware of it. Get together all the balls from over the place and make us believe in everything that you would be doing all the times. Get ready to determine us in the best manner and prove that you could do anything if you are so good. Elroy really wants you to be there and that is the main thing in which we are sure that you would be winning over and over again.

Use the arrows and the spacebar