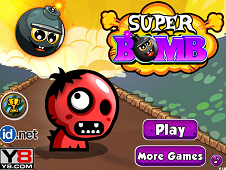 What is Super Bomb?

A very clever and smart scientist has created a indestructible monster but this wasn't him intention and now he is the one who has to create a weapon against the monster in order to be killed. The scientist has created some kind of bombs, with such a powerful explosions just like an atomic bomb and when this bomb touches the monster, he's gonna be dead instant! The monster is hidden through 25 levels of this fantastic game so you have to kill him in each of levels if you wanna really get rid of him. The levels from the beginning are gonna be not so hard but the last one are gonna be such a difficult mission to accomplish because the traps, obstacles and any other barriers. Start right now and use the power, mixed with logic and intelligence and get rid once and for all of this dangerous red monster. Good luck and have a lot of fun while you are playing and see you at the end of the game, when you are gonna be famous for your act, for killing this almost indestructible monster!