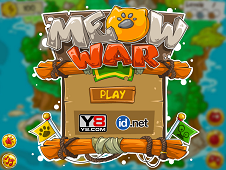 What is Meow War?

A cat when starts to be angry or dissatisfied for something, gets really really upset and nobody in this Universe wanna mess with an angry cat. This aliens, who wanna invade our planet and stole all our cows because they need milk, have messed with the wrong animal species, and I don't mean cows. The cats have declared intergalactic war to this aliens who try to stole their food and this game wouldn't end until one of these two species are dead or quit. Your mission is to control the cat army and to try to beat the aliens with strategy, intelligence and logic because this way the victory is gonna me even sweeter. Use the mouse to control your army. and to defeat the Earth and the Earth's cows for the aliens invasion and do not stop until you see them getting back to their planet with all them UFOs. Good luck and have a lot of fun while you are playing one of the most beautiful strategy games you've ever played and prove that cats are stronger and smarter than the aliens!