Which My Little Pony Are You

FNF Elements Of Insanity vs My Little Pony

FNF Elements Of Insanity vs My Little Pony Cupcakes 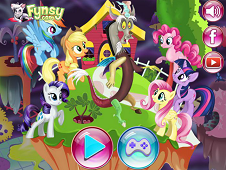 What is My Little Pony Chaos Magnet?

Discord is a good friend of My Little Pony girls and he has some really troubles right now because he was cursed to his magic to be used against him and to work as a chaos magnet, which means that Discord attract to him a lot of destroying things, things that could kill him from the first touch so here it comes your mission. Prove the Princess Celestia that she was wrong when she has cursed Discord and use his remained powers in order to avoid those things that come to destroy him and his house. Avoid the destroying of the house and get a score as high as is possible. Use the mouse to do this in order to aim the coming objects with Discord's objects. Be smart, act logical, act fast because the things come more and more as the time passe and you don't have time to breathe because Discord is gonna be killed and his house destroyed. Use your mental strategy and don't waste your energy. Hit intelligent, now powerful and prove this princess that she was wrong about Discord!