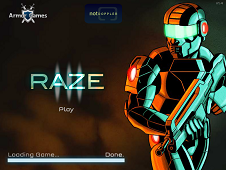 Raze 3 is a fantastic future game with the human civilizations on the spatial ships communities which train special soldiers for the aliens attack. The earth was invaded of the aliens in the recent past and the whole Earth was devastated and there are no more life conditions on the earth but here in the space stations there are special and artificial life conditions and the people are smarter, the technology is higher and everybody is preparing for an attack on aliens. Your mission in this fantastic game is to pick up a random soldier from the humans army in the space and to train him in order to be one of the best soldiers from the attacking line. Help the humanity to rescue and to recover their planet and these things are possible only by defeating the aliens who live on the devastated and destroyed Earth. Good luck and have a lot of fun while you are fighting, training and avoiding get dead by the lethal training traps. Use the force, the intelligence, the accuracy and the ability and do not forget about technology in order to be the one!