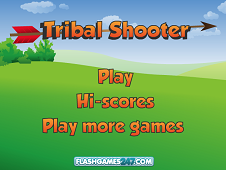 What is Tribal Shooter ?

Shooting is one of the most difficult task you would ever get in your life it doesn't matter about the context or the circumstances. In this awesome game, you have to prove that shooting is not that difficult if you focus and use your skills and precision. You take part from an Indian tribe and you should prove that you are just as skillful as the others are. You have to use the mouse in order to shoot an apple. It sound pretty alright, doesn't it? Alright, the things are not that pink because I forgot to say that those apples are gonna be ahead a head of an human. An Indian teenager from the tribe is gonna be the support for the apple and one arrow from your shooting bow is gonna be enough for him to get killed so you have to accomplish a double mission. First mission is to shoot the apple in order to get to another level of difficulty, and the second task is to keep this teenager alive because he's so young and he has a lot of things to live and to see anymore. Good luck and accomplish in a skillful way these two main missions and do not forget to have fun while you are playing!