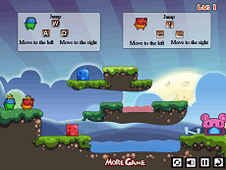 What is Elf Prince?

Elf Prince is a game immediately added Animal Games category on our site play-games.com only for you gamers who can play the 2 and which are full of adventure and adrenaline. Elf Prince is a game where you play the keyboard using keys W, A, D and arrow keys for player 2 player 1. Elf Prince is a game where you have to pass several levels, each with its own degree of difficulty and which route you will meet a lot of obstacles that will give you big headaches. In this game you have to figure out which route to follow, the correct one, because apparently there are several good trails, but it is only an illusion, they inducing you into a trap. The characters that you'll adventure are two elves, both kings with crowns car. One is red and the other blue. This game is a multiplayer game, you can play with your friend, of course from the same computer and keyboard. This is an online game for free which hopefully gives you satisfactions sought. Success!