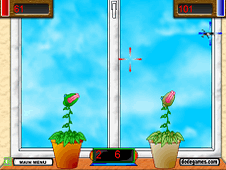 What is Sundews Fighting?

Sundews Fighting is a game where you have to give proof that you are a perfect fighter, so this fight with plants to be taken to another level, resembling a major fight between two fighters genuine World War. Sundews Fighting is a game where you have to give all your best to always win in your opponent's face, whether it is the computer or a friend of yours, because this game comes with multiplayer game property, which means that can you gather some friends and start a real championship. What to do in this game? You will lead a carnivorous plant, pink, which has a crazy appetite, so you have to eat all the insects that go through your face. Do not rush to judge how it would be an easy game because your opponent is also hungry and very cunning. Focus and move as fast, so you eat all the insects. Watch as the round you just 60 seconds, so we have that in this minute to prove you're a fighter who does not teach again and to fight until the end. Interestingly, the action of the game takes place on a window sill, which gives the game a bit of fun.

Use the mouse and the arrow keys.