Angela Design With Me Winter Sweater 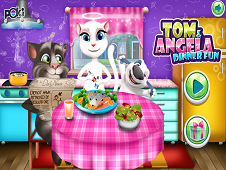 What is Tom And Angela Dinner Fun?

Tom is a pretty picky kitten and he doesn't love going out or having dinner in some special restaurants because he wanna keep it simple as long as it is possible. Angela is so pissed off of this idea because she was rejected by Tom not long ago when she was asking him for a romantic dinner in two at a superb restaurant from the neighborhood. Tom said no and Angela now is so angry and she really wanna take the revenge! She has decided that spoiling his food is gonna be a pretty nice revenge so she has decided to make it right now but she can't do it all alone so she is asking you for your help, of course, only if you wanna help her. Help Angela to put a lot of salt and a lot of pepper in his salt and this fact is gonna make Tom very shocked and upset because his dinner is gonna be ruined, but that's exactly what Angela wanna do. Help her accomplish her plan and do not forget to have fun while you are playing this awesome and fantastic game especially made for you!