Heroes of Myths Warriors of Gods 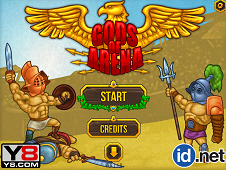 What is Gods of Arena?

Each god from the Ancient Rome or Ancient Greece was well known for their force, their power and their capacity of hitting and defeating another gods or another fighters who have dared to challenge them or to accept their challenges when it came to fight. This awesome and amazing game offers you the unique occasion to taste from the Ancient culture and to create and train your own God and to be his master until at the end of the tournament named Gods of Arena. Earn a lot of money from fighting with another gods, buy some new equipment for your fighter and in the end you can even buy another fighters or Gods who you also have to train and to make the successfull fighters. Good luck and have a lot of fun while you are playing this awesome and awkward strategy, fighting game which involves Gods and divine power! Prove that you are the best and conquer this tournament with your warrior!