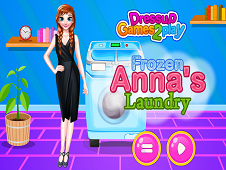 What is Frozen Annas Laundry?

Being a princess doesn't stop you from the housekeeping works and the real prove of this thing, the alive evidence, is even one of the greatest Disney princess you've ever seen, princess Anna, the sister of another great princess, Elsa, both of them coming straight outta' Ice Kingdom. Anna is famous for her role in the animted series Frozen, where she had a lot of friends and a lot of fans. Anna has recieved a task from her mother, and this tasks involves washing the clothes. She has to do it by herself and indoor because outdoor there is winter and the winter are so rough here, in the Ice Kingdom! Of course, she can't handle this thing by herself so she would be glad if you would help her! Firstly you have to separate the colored clothes from the black ones and then you would better start putting them in the washing machine. After the machine is ready, you should dry them and afterwards iron them. Good luck and have a lot of fun while you are playing this awesome and awkward game!