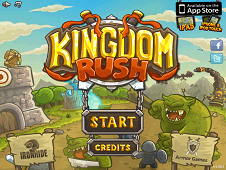 What is Kingdom Rush?

Kingdom Rush is a game which fits perfectly in the strategy and fight games category. Both of these categories are so perfect for this awesome game because your mission is to build an empire, a kingdom from an empty ground. It sounds pretty impossible but building a real kingdom pretends more than just knowledge and hard work, it pretends ability, insight, logic, clear thinking and a lot of intelligence. You have to build this empire by yourself and a great start for this future huge building would be a tower, which is ready to get built but the invasion of the enemies has just started! Avoid it in order to get back at your building again but you have to do it a couple of times again because you are going to be invaded so many time for now so you should be happy now because until now they've attacked you only little creatures. The big ones are gonna come as you progress in this awesome strategy game. Build your own empire and prove that your strategy is the winning one and show your eneimies who's the real boss, who's the owner of this amazing and rush kingdom!