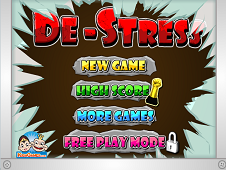 What is De Stress?

De Stress is one of the greatest games which is certainly make you feel better and set you free! This incredible and awesome game presents you the story of life of one of the ordinary employee who has some real troubles with the big boss. The boss is always angry and he can't control his behavoir so you have to avoid him when he's angry. Unfortunately, this poor employee couldn't avoid his anger and now he's so sad and upset because the boss has downloaded all his anger on the poor employee. This poor man really wanna take his revenge with this fat and fool boss but he can't touch him because it would let him without a job so he is not gonna have money anymore but he found a better solution. In the following day, the boss has called him and when he saw the phone, he has decided to destroy it. Help him hit that damn phone with the fist and produce it so many damages. The phone is strong so you have to hit hard and do not give up until you make the happiness metter full in such a short time and also achieve some really many points! Good luck and have lot of fun!