All Sorts of Fun 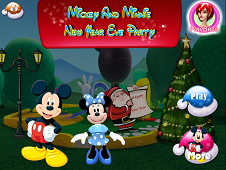 What is Mickey and Minnie New Year Eve Party?

Mickey and Minnie Mouse are maybe the cuttest couple in the history of Disney Channel's history due to fact that they are also some of the oldest couple and their love stayed as strong as in the first day even now, after the time has passed over them! They are so loyal each other and they spend almost all the time together loving each other and they will do the same thing even now, for these holidays. Christmas is almost gone and they've spent it together as the rest of them, and alongside their friends and family but the New Year is coming and they have prepared nothing yet for the big New Year Eve. They really wanna organize a monster party for the New Year Eve to their house but they've totally forgotten about this thing and they've bought nothing! Fortunately there is some time until the New Year so they have enough time! Go with them for a shopping session and achieve the list which consists an amount of objects that Minnie wanna buy for this Christmas but do not exceed the budget! Have a lot of fun and Happy New Year!