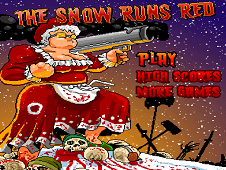 What is The Snow Turns Red?

We are in the future right now and Santa Claus doesn't exist anymore because he has killed himself because of the kids around the world! They are so many right now and almost all of them are bad and naughty but they still are angry because they didn't get any presents for Christmas and Santa has received a lot of reclamations because of that and he couldn't take it anymore and he decided to commit a suicide. Right now, the kids are going to the North Pole in order to attack the magic Tree which produces all the presents for kids. Their path seems to be easy but you are the one who is gonna help Mrs Claus, Santa's wife to keep the Tree safe and to kill the kids! Mrs Santa is so pissed off and you have to show the kids that they've messed with the wrong old woman and prove them that Santa's spirit is still alive and kill them all because they were so naughty and they wanna hit this magical Tree and kill Mrs Claus. Use your fighting and killing skills and shoot them all! Good luck and have a lot of fun while you are playing this incredible and awesome game with Mrs Santa and help her run the snow red with kid's blood!

Use the arrows, SPACE