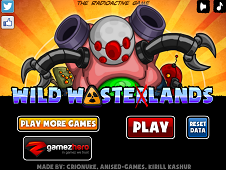 What is Wild Wastelands?

Wild Wastelands is one of the greatest adventure and shooting game from all time due to fact that it is easy to play but its missions are not as easy to get solved. This awesome and fantastic adventurous game brought by our site especially for you, brings you in the foreground the situation of some far away wastelands which were destroyed by the wars and other dangerous factors like this. Right there, it was a secret laboratory with some radioactives substances which are so lethal for the humans. Once, somebody has found about it and destroyed it but from the disaster, some huge and ugly mutants with some strange powers were born. Defense the world against them and shoot them all using your shooting skills and abilities and prove that the humanity is always above all the strange and powerful mutants! Watch out in order to do not get too close for them because they could kill you even if they don't touch you. Be brave, be strong and use the mouse in order to kill them all!