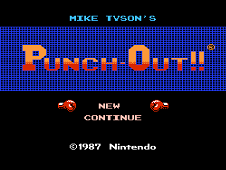 What is Mike Tyson Punch Out?

Mike Tyson was declared so many times in the past the toughest guy on the planet, due to fact that he has uncoutable times the World Heavyweight Champion at box and his punch has well known even in the furthest parts of the world. He was recognized as a beast with no mercy because of his punches but now he isn't in activity anymore, fortunately for his opponents. Playing this old game with boxing, you are gonna have as a main character the incredible and awesome Mike Tyson! You have to fight against some really big opponents and of course, you must destroy them all and beat the shit out of them, just as Mike used to do before! Use the famous Mike's punch in order to destroy your opponents even if they are taller or bigger than you. Do not let yourself intimidated and have a lot of fun while you are playing this incredible and fantastic game offered by our site especially for your fun and entertainment, and prove that you are number one boxing guy and the follower of the legendary Mike Tyson!