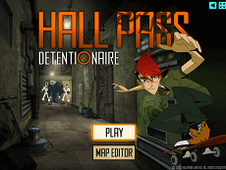 What is Hall Pass Detentionaire?

Hall Pass is a game Detentionaire incredibly addictive that you will not let it go near the computer until you pass each level, thus becoming the best strategist of the site and having the chance to come in among the best players. Hall Pass Detentionaire is a game full of strategy, where you will have to think how you can do to ensure protection of the clan of young high school students who want to get over some parts of the city, but are afraid to secure without back, because it's full of teenagers put on fools who want to attack. What will you do to stop them young to attack? That's your mission, which is to place various traps and weapons that will surprise take by surprise these young people. You must analyze and think situated, putting each catapult or other weapon in a strategic direction, where it most likely that the enemies to pass, so if they come in range of the weapon, they will be felled and integrity youth is saved. At the top you will see a score that must comply to do to be bigger, it also representing monetary form of the game, so the points you will buy other better weapons and stronger. Watch out because the game seems simple, but it's not that sometimes appearances deceiving people.