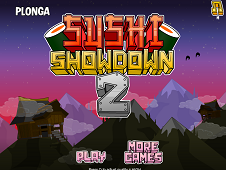 What is Sushi Showdown 2?

Sushi Sowdown 2 is a great and amazing game which presents you the situation of one of the most interesting and fantasic ordinary man, who works at a Sushi restaurant, even in the middle of the Japan. Japanese style and culture is pretty different than the others, because they believe more than the rest of cultures in the spiritual side of a man's life so they follow their heart and soul often than their thinking and brain, so this man is doing the same thing! This man has became the hero of his own story and he follow his soul, which tells him that he has to be the savoir of the world, so this means that he has to fight against monsters, other evil people, zombies and a lot of other evil powers which try to bring the world down! Help him to fight against all these treats for him because afterwards he must return to his job, at the Japanese Sushi restaurant so there is no time to waste! Good luck and have a lot of fun while you are playing this awkward game special for you!