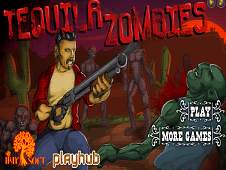 What is Tequila Zombies?

Zombies are some of the most feared and ugly creatures in the world, due to fact that they are some dead men but still alive, not with their souls, but only with their cursed body. Their body get cursed from unknown reasons and they wanna eat some fresh brains from the damage people, just like you and me. First of all, you have to know that you have the honor to control this hero who has decided to get them back under the ground, where their place really is! Load your gun, shoot them exactly, and kill them all before they catch any other people! Firstly, your hero is going to have a machete, so the mission is gonna be pretty harder for him, but using the arrows, you can pick up some weapons from the floor, which has felt from the zombies. Watch out because your hero is gonna be rewarded with some tequila as he kills the zombies so kill them fast because if you don't your warrior may get drunk and then you will have some problems because the zombies is gonna attack them!