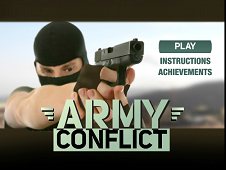 What is Army Conflict?

Inside of an army which holds some of the most dangerous people on the Earth, some terrorists, there is gonna happen a conflict, because a lot of terrorists has escaped! Right now, they are going to go as far as they can, and once they are in the middle of the freedom, they would put their dirty and crazy hands on some dangerous weapons and they would become again a main danger for the rest of the world. First of all, you have to know that you have the responsibility to stop them, and there is only one way to do this, by shooting and killing them all. Use the mouse in order to control your gun and shoot them with a lot of accuracy in order to kill them or to put them down using only a bullet per person. Good luck and prove that nobody messes with you, because you are the best shooter from the whole army! Prove that you are number one when it comes to target accuracy and aiming and show those motherfucking terrorists that they are not going to live anymore if they mess with the wrong guy!