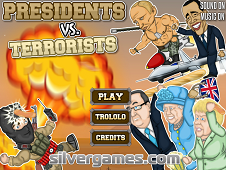 What is Presidents Vs Terrorists?

Presidents vs terrorists is one of the most incredible and awesome game offered by our site especially for your fun and entertainment! This game, makes you known one of the most serious problems that humanity faces nowadays, the terrorism! The terrorism is a mental disease that some people have and they kill the other people with the religion as the main reason. These guys, the terrorists deserve the worst death in the world, so right now, in this awesome and amazing game, you are going to have the unique occasion to kill them slowly, using the force and the hitting skills. Beat them all, in order to make them regret their acts and have no mercy while you are killing those animals. This games involves a fight agains presidents and terrorists and you will control the presidents. Hit one of them and attack him with so many weapons, guns or rockets in order to product him as many damages as you can and make sure that you kill him or hurt him so bad. Every president will bring a new weapon so use them all!