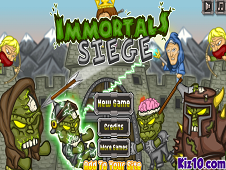 What is Immortals Siege?

The army of the immortals people who are jealous on their king, has planned an ambush, a siege on the king's castle, but they are so crazy, fool and reckless that they don't even thought that this would be the worst decision that they could ever take in their life. The king prefer to face them himself, without soldiers intervention, because he feels like he can handle this situation by himself. Immortals siege is getting faster and faster so you have to hurry up, because there are going to come more and more soldiers at the castle, and the king is only one. Climbed on the gates of the castle, the king is going to aim and shoot the immortals army with some big and sharp spears that will cut them one by one. Shoot intelligent, in order to aim their heads or hearts, and those shots are going to product them more damage than the average ones so play intelligent, aim exactly and have a lot of fun while you are playing this awesome game, and defend king's castle wisely and with no problem!