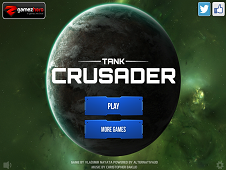 What is Tank Crusader?

We are aware that in the last period a lot of girls games have appeared on our fantastic gaming site, but boys, I hope that you didn't think that whe have forgotten even a moment about you, because we definitely didn't do this! As a proof, we have prepared special for you this game, which consists in an intergalactic adventure which is going to amaze you and challenge you to overcome your limits and all your potential powers because you are going to go in the mission of your life, the most dangerous mission which is certainly going produce you a lot of adrenaline but also it could give you some damages so if you think that you are not ready, you would better stay home! This game challenge you to become a master when it comes to driving and shooting using a huge robotic tank, a high tech tank which has been created for defeating the aliens forces. A lot of people have colonized some parts from the space because the Earth became overpopulated and the food from the Earth has became less and less. Help the humans stay in their space colonies and defeat all the aliens!

Use the mouse, arrows