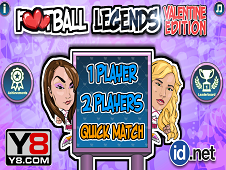 What is Football Legends Valentine Edition?

Football Legends was such a successfull game which has appeared on our fantstic gaming site not long ago and it was played by you so many times because it really was, is and it will be a fantastic game, with your favorite football legends which are ready to entertain you in the latest freestyle footbal demonstration! You have to pick up your favorites football legends from the present and to play 1 vs 1 on a small pitch, with two tall goals and who scores more goal in a period of time, wins the match. Now, once with the coming of Valentine's Day, this game has brought for you its latest version, Football Legends Valentine Version, and awkward game which challenges you to pick up your favorite legend and to win alongside his girlfriend and him the tournament! Good luck and prove that even girls know something about football and make the other couples cry because of their defeating in front of you! Good luck once again and let's get to the work! You can also play this game in two players so you can ask a friend to play this alongside you for double fun!

Use the arrows, X, Z