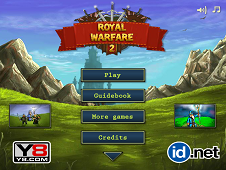 What is Royal Warfare 2?

Royal Warfare 2 is the latest game appeared on our fantastic gaming site exclusive for your fun and entertainment, and it brings you in the foreground the situation of such an adventurous crowd of people who are ready to defend their places and lands from the attack of some dangerous wizards or monsters or any other possible dangers which could challenge them for a fight. This game fits perfectly in the Strategy Games or Fighting Games and it involves a lot of strategy fighting but also intelligence because you do not only have to be insight and powerful, but also to have a great logic because you must spend some money in order to buy new soldiers and more powerful ones so you definitely are going to have some fun, but also a lot of responsbility falls on your shoulders because you must prove that you are a good player in the Royal Warfare 2 defending and attacking game! Good luck in your try and have a lot of fun while you are playing this awesome and incredible game and let's fight!