Dr. Colosso on the Run 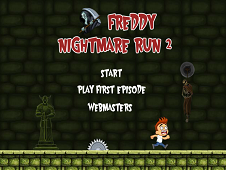 What is Freddy Nightmare Run 2?

Freddy is one of the most addicted kids by the video games in the world, and he definitely is the greatest when it comes to imagination because this kid has some real scary and spooky nightmares! His mother has told him to go to sleep right now but he didn't finish his game yet. As a good and listener boy as he really is, he has listened to his mother and when he felt asleep, he has been having a nightmare which is still on in his head! This is the second version of the Freddy Nightare Run game, which challenges you to overcome your limits in order to help Freddy to avoid the obstacles and to get rid of the dark monsters and creatures or beings which are following and chasing him! Use the arrows and the SPACE button in order to make Freddy get rid from this haunted castle where he is stuck in and have a lot of fun while you are helping him to get out of this awful nightmare, which has been stared because of those violent and horror video-games! Good luck once again and let's start this mission!

Use the arrows, SPACE