Mystery of the Batwoman 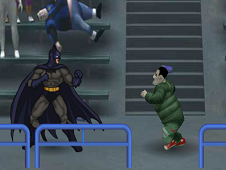 What is Batman Fighter?

Batman Fighter is one of the newest games that appeared in the fighting category will test the skill and agility. In this game you will need these qualities because only you will accomplish your objective successfully. In this game you will be with Batman, one of the largest and most powerful heroes in the world, with millions of fans worldwide. You have to help him win each fight Batman as against enemies who want to do illegal things in his town. It's pretty simple at first because you fight the weak enemies, but as you advance in higher levels, enemies will be more powerful and will be increasingly difficult to destroy them. In this game you must use the arrow keys to move, the up arrow key you can jump and space have to attack. At the top left of Batman's life will end if you lose and have to start playing from the beginning. Give of your best to reach the top of the best fighters with Batman.

use the arrows to move and space to attack